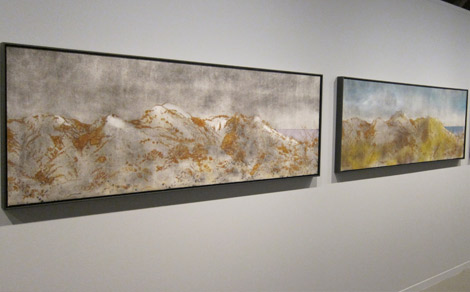 25-12-2013
Sala Daura at Montserrat’s Museum holds a tribute exhibition to Joan Barbarà, considered one of the best Catalan engravers of the 20th century. Entitled Mediterrani, the exhibition gathers one hundred works –among engravings, oil paintings and drawings- and examines subjects such as landscape, architecture, and the products from the earth and the sea.
Among the works that can be seen at Montserrat are several series of engravings. The section Empúries, inici d’un retorn –Empúries, A Journey Back- (1992-2002) includes giant engravings up to 2 metres, printed with a huge screw press in his studio. Eivissa (1948-2008) contains 36 small size engravings using different chalcography techniques. Costes del Garraf (2008) shows 5 hand-painted 1,80-metre engravings, where he creates different lights. Negre sobre negre –Black on Black- (1995) depicts the making and destruction of the same copper sheet. Liceu is a symbolic work, it began from sketches he drew when he visited the remains of this theatre, ruined by a fire in 1994, with Montserrat Caballé, who in that circumstance sang El Cant dels Ocells –The Song of the Birds-, accompanied by cellist Pere Busquets. Along with these sections, other individual engravings are displayed. They are medium size and very rich in techniques, made between the years 1954 and 2000. Likewise, there is a section of oil paintings made between 1963 and 1972, and 25 collages on canvas (2006). Finally, the show is completed with two series of coloured drawings (2006), and two pencil drawing portraits from 1947.
Mediterrani, shown in Montserrat for the first time, is travelling to Goya Museum in Castres, France –from February 23rd 2014-, to the National Gallery in London –October 2014- and to the Bibliothèque Nationale in Paris –graphic art works of his collection- in 2015. Joan Barbarà’s works are displayed at public institutions in nine countries.
Joan Barbarà (Barcelona, 1927) is a renowned artist engraver. Some of the graphic art works by great contemporary artists such as Miró, Tàpies, Saura, Chillida, Hartung, among others, were produced in his studio, under his direction. He makes his first exhibition at the age of seventeen; in 1943 he takes part in the group show Els Blaus, with Joan Ponç and August Puig at Centre Excursionista de Sarrià, Barcelona. The next year he sets up his first studio at Argenteria street in Barcelona. He takes the courses by Antoni Prats, where he meets Pamen Trenkle, who will become his wife and mother of his three children. He takes part in the courses and workshops by Francesc Mèlich and Edouard Chimot and illustrates with engravings the text by Joan Triadú for the book Collsacabra (1949), while publishing his book Eivissa in 2008. His oil paintings are shown both at Galeries Laietanes and at Sala Dalmau’s Spanish American Biennial. His engravings are exhibited at Galerie Maeght. In 1953 he is awarded his first engraving’s prize at the Municipal Exhibition in Barcelona.
He contacts writer Pío Baroja and they exchange texts and drawings. Thanks to a grant from the French Institute, he moves to Paris, where he founds the Atélier de Recherches Plastiques et Techniques Calcographiques, together with Lluís Bracons. There he collaborates with several studios and meets Salvador Dalí, who introduces him to Picasso, Miró, and other creators of the moment. Back in Barcelona, he gathers in his own studio the artists of his generation: Tàpies, Chillida and Saura, along with the artists already mentioned above. His studio is flooded with great projects and becomes a studying centre of international interest.
Moreover, he has published various bibliophile or artist books in collaboration with writers Joan Triadú, Baltasar Porcel and Miquel Dolç. Thanks to his wife, he gets into the musical milieu and meets musicians and composers like Josep Cercós and Lewin-Richter. By means of his son-in-law, cellist Pere Busquets, he gets acquainted with Àngel Soler, with Quartet Sonor and with Paul Tortellier, and transforms part of his studio in a rehearsal room. He produces an engraving on occasion of his visit to Liceu theatre with Pere Busquets and Montserrat Caballé after the fire, which impressed him deeply.
His journey along the Mediterranean with hellenist Alexis Eudald Solà encouraged the edition of the book Empúries, inici d’un retorn, followed by a series of large-sized engravings. The exhibition of these engravings; the show on occasion of the 50th anniversary of his studio; the series Bodegons –Still lifes- and Black on Black have been exhibited around the world.