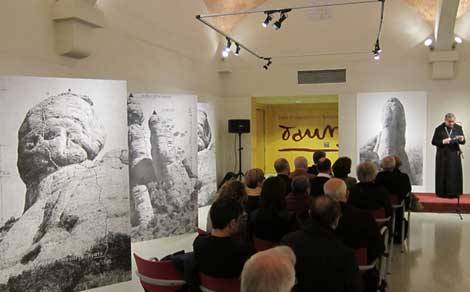 30-04-2015
Espai d’Art Pere Pruna in Montserrat’s Museum shows –until July 12th- a collection by the Olot-born artist Lluís Hortalà, entitled Temptations. Here Hortalà “carries out a creative artistic work, based on the finding of postcard images which are being returned to their place of origin”, according to the artist Javier Peñafiel. “And he is doing this for two reasons: the memory of having climbed these particular mountains and the act of drawing them at the same time, as though to make a mistake in the drawing or not finish them would mean falling into the void”.

Lluís Hortalà suggests a series of recent works about the postcards, in which the informative texts that accompany the images turn into landscape; the image disappears and the text remains. In some of the works, images are partially erased; the visual narration, though blurred, is suspended.

At Temptations, two moments and two specific aesthetics of the mountain are fused: that of the old postcards of Montserrat by Father Benet Junqué, which Hortalà has collected for years, and that of the pictures in the diaries for mountain bookguides in the 70s by Josep Maria Rodés and Ferran Labraña, related to his extensive experience as a climber in Montserrat, which will mark the starting point of the exhibition.