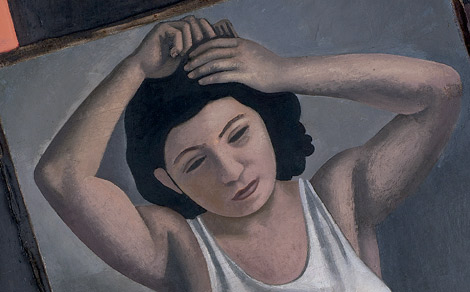 28-02-2013
Jordi Fornas, painter, From March 4th at Espai d'Art Pere Pruna
Montserrat’s Museum (MDM) is preparing an exhibition about the graphic designer Jordi Fornas –Jordi Fornas, Painter-, at Espai d'Art Pere Pruna from March 4th to June 9th, curated by Sílvia Muñoz d'Imbert.
Jordi Fornas Martínez was, for many years, the head graphic designer of magazine Serra d’Or. Best known as a designer, he belongs to the leading group of artists and intellectuals who contributed to modernise the Catalan culture during the Sixties, in his case through pop style. This retrospective aims to be his posthumous tribute, and will focus exclusively on both his paintings and his sculptural work, less well known.
Jordi Fornas wished to be considered a painter. Hidden behind the big success he had had as a designer, he belongs to a generation of artists -many of them emerged from Salons d’Octubre (1948 to 1957)- not sufficiently present in Catalan public collections, not even in our imaginary.
For this well-deserved homage to Jordi Fornas, the MDM is showing a short tour through the most representative works of the artist, from his stay in Ibiza to his period in Palautordera (Barcelona), as well as the times spent in his studios in Sants, Sarrià and Ciutat Vella, in Barcelona.
And also: Parallel Universes, by Waltraud Maczassek, from March 15th.
Simultaneously, the exhibit Parallel Universes, by Waltraud Maczassek, is being shown from March 15th to June 9th at Sala Pere Daura. It will be curated by art critic Josep Corredor-Matheos.
Waltraud Maczassek is a German artist who settled down in Barcelona years ago, and resides in the Penedès area. She draws her inspiration from nature to depict interior landscapes. Her work, mostly pictorial, is closely aligned with lyrical abstraction. Nature and, more specifically, the origins of life, are the basis of the present exhibition in Montserrat.
In her paintings, Maczassek re-interpretes cells and molecules, and questions herself about the most primitive vital shapes, while embracing the landscapes of the country that has welcomed her. They are not only terrestrial shapes –mostly starring vineyards and wine-, but also marine shapes. In this sense she searches the communion between mankind and nature, since it is usually about lived, breathed, trodden landscapes with a tinge of phantasmagoria.
More Information