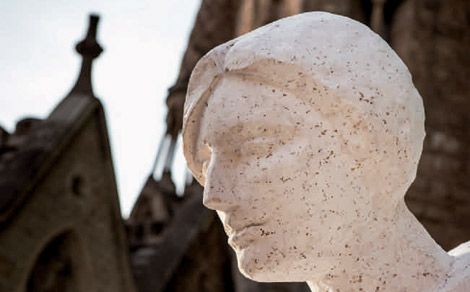 07-04-2015
According to the artist, ‘in his youth, the Saint’s figure interprets the strong personality of the patron saint of Europe, also considered the patron saint of Western Europe’s monastic life’. ‘After studying his biography –with the emotional support of F. Alcuí M. Serras, a.c.s- we have interpreted a young, courageous, strong-handed man. With hands that have built monasteries, but have prayed and blessed as well’ explains Manuel Cusachs.
These St. Benedict’s hands by Cusachs, in praying attitude, express the shape of a cavity, recalling the grotto where the Saint lived the emerging mysticism. They can also symbolize a living or coexistence space, such as a monastery. A space for silence. Simultaneously, they hold the book of the Rule against the chest. The sculptural expressivity focuses in the area between head and hands, where a cross is sculpted, along with the upper part of the walking stick, symbols of an abbot, and the book of the Rule. Beside the sculpture a bramble climbs by gripping to the habit in the shape of the Benedictine cowl, like the plants gripping to Montserrat’s rocky walls, to symbolize the Saint’s temptations.