Recovery of Antoni Gaudí’s original design for the Monumental Rosary 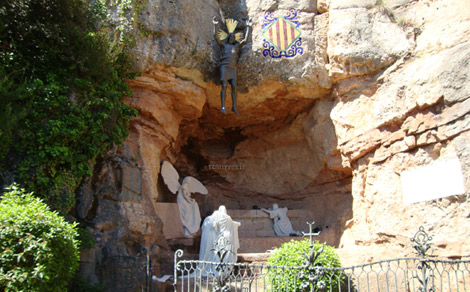 09-04-2015
The First Mystery of Glory of Montserrat’s Monumental Rosary, designed at the beginning of the 20th century by Antoni Gaudí, has finally recovered its initial design after the restoration works. The promoters of this work: Montserrat’s Abbey, Diputació de Tarragona (Council of Tarragona), the Direcció General del Patrimoni Cultural (General Management of the Cultural Heritage) and Institut Català del Sòl – INCASÒL (Catalan Institute of the Land – INCASÒL).
Restoration works based on a project by architect Anton Baraut, and they consist of the relocation of Christ Resuscitated –according to Gaudí’s project-, the restoration of Christ’s sculpture; the restitution of the inscription Ressurrexit, non est hic and the cleaning of the area of the dug cave and the tomb. The restoration includes the sculpture of the angel; the sculptural group of The Three Marys; the offering plaques, the coat of arms and the closing fence. There has been a new planning of the garden in front of the First Mystery of Glory, and the vantage point with a stone bench have been rebuilt.
The First Mystery of Glory, the Resurrection of Jesus, was initially designed by Antoni Gaudí, and was provided with a religious, symbolical character. Its depiction got soon identified with Catalonia’s resurrection. Gaudí dug a big cave into the rock to set up the tomb, and made just some of the images that make up the current ensemble. The sculptures of the angel and Christ Resuscitated are works by Josep Llimona (1864-1934). The Three Marys were sculpted by Dionís Renart (1903-1619), following Llimona’s sketches. The closing fence was crafted at Ballarín House according to a project by architect Jeroni Martorell, who also directed the culmination of the Mystery’s works. The ensemble is crowned by the Catalan coat of arms, made using Gaudí’s technique trencadís –also known as pique assiette- embedded into the rock, a work by Jaume Bayó.

The construction of the First Mystery of Glory

In April 1903 the Lliga Espiritual took on the commitment to build this first mystery of Glory and, on May 15th the same year, Antoni Gaudí declared it would be built depending on the amount of money raised. The architect suggested sculpting a tomb in the cave in order to offer it to Jesus; it would be a golden bronze image, placed on an altar. If budget allowed it, he wished to build an orchard or vantage point. The Mystery’s Board authorised the architect to start works in December 1903. However, the works were constantly delayed because of their high cost.
In August 1907, the sculpture of Jesus Christ Resuscitated was placed. According to abbot Deàs, the sculpture’s location was not correct, for this reason Gaudí withdrew the work’s direction, and Christ’s sculpture was moved to another place. At the moment of Gaudí’s departure, the cave was already built, as well as the orchard’s slope, Christ Resuscitated and Catalonia’s coat of arms.
Gaudí’s withdrawal coincided with the lack of money, so the works were interrupted. Around 1911 the angel and the tomb by Josep Llimona were placed according to Gaudí’s project. In June 1912 definitive construction works resumed, with noticeable changes. The author of these changes was Josep Llimona, who made a mock-up as a model in order to finish it once and for all. The Lliga Espiritual’s book of events shows the whole chronology of its conclusion, under the supervision of architect Jeroni Martorell.

On January 20th 1916 the Three Marys were finally placed and, in September, they set the fence up. Works concluded in 1916, and both the Mystery and the entire Montserrat’s Monumental Rosary were blessed.
During the first days of the civil war, the mystery suffered many mutilations: the angel’s wings, the heads, arms and hands of the sculptures were broken, and the inscription Ressurrexit, non est hic disappeared. After the war, it was restored during the reconstruction of the Sanctuary. The inauguration of this monument took place on June 7th and 8th 1947, during Montserrat’s Virgin’s Enthronisation celebrations.