"Reflections on the Past", photographs by Francesc Esteve at MDM 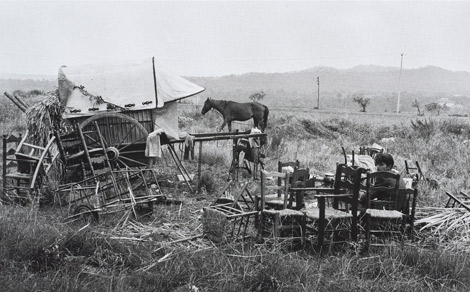 11-09-2013
Espai d’Art Pere Pruna, at Montserrat (MDM), houses a photography exhibition by Francesc Esteve (Sabadell, 1932) named ‘Reflections on the Past’. The show is made up of around eighty black and white photos, most of them taken between the 50s and the 60s and is linked to the Italian Neorealism. Through his photos, Francesc Esteve earns a position in the social photographic chronicle of our country, since he has been able to capture a period and a town: Sabadell.
“I have always made my own kind of photography instead of the one imposed by clubs and fashion tendencies”, points out Esteve on one of the exhibition texts. “They are gentle photographs, of our homeland –he adds- without stridencies, without the need to appeal to the newness of what is exotic; spontaneous; photos which are not prepared, sensationalist or violent”. “My photos aim to capture everyday movements. They have never been tamed by standards of any kind, or by too much technique, since this would have limited my appreciation of every instant”. Esteve, the son of a family of manufacturers in Sabadell, graduated in law and started out in photography through his father.
“There is a lot about Fellini in his portraits of children and in his views of markets, especially in the tender and nostalgic El nen del sucre (Sugar boy)”, says Artur Ramon Navarro, antique dealer and art historian.
“There is nothing random or anecdotal in Esteve’s images. Beyond social mores, the photographer searches for the truth of life behind his characters, and concentrates in them the many shades of black and white photography: images we receive with the quality of silver. His work is an efficient, simple mirror showing the world he has lived. There is no baroque rhetoric, it is pure poetic prose” sums up Artur Ramon in an article of the exhibition booklet, where he justifies the recognition he deserves.
Francesc Esteve and photography
Francesc Esteve (Sabadell, 1932) joins Sabadell’s Camera Club in 1957. In the 1950s his photographs earned him numerous awards in the most prestigious contests of that moment, such as those from Luis Navarro’s Agrupació Fotogràfica de Catalunya and Sant Adrià del Besòs. It was the golden age of photographic associativism. The most productive period of his career starts in 1961. He moves away from contests, since he does not like their criteria and photographic view, and starts a path of creative freedom in terms of technique and subject. His work gets away from pictorialism and affectation. Places with movement predominate, such as markets, fairs, parades, processional marchs… To him photography means a reflection of current society, a succession of everyday situations through the habits and relationships of people, and the typical atmosphere of the moment. The 50s and 60s he portraits are the years of the post-war reconstruction, and the changes derived in passing from the autarky to the border opening, and the migratory flow caused by the new industrialization and his contact with the beginning of a Catalan cultural renascence.
Professional and personal circumstances force him to a long break in his artistic activity. Thirty years later, after becoming a pensioner, he focuses again in the landscapes and people from Sabadell, with the same eagerness for truth and irony, yet with a new satisfaction to see the new country come back to life.
In 2000 Museu d’Art de Sabadell dedicates him a retrospective and publishes a catalogue with images from 1943 to 1998. Esteve has hold group exhibitions with photographers such as Francesc Català Roca and Xavier Miserachs, and his work is part of the collections of Museu d’Art de Sabadell and Museu Nacional d’Art de Catalunya. He has collaborated with numerous shows and magazines. Among the most recent ones, he has published the book Passatgers (Passengers), with texts by Joan Cuscó, including 200 casual photos of people from Sabadell.