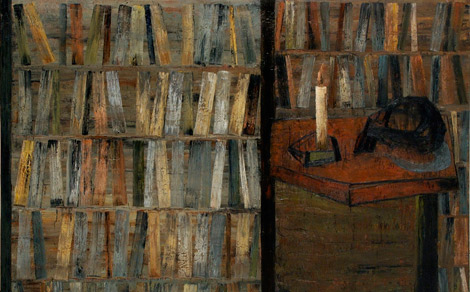 24-12-2013
The exhibition Vanitas – Libraries consists of a selective, intimate series of sixteen works about libraries which the painter Carles Gabarró carried out between August and October 2006, and had never been exhibited yet . On scaffolding-like orthogonal structures the artist gathers books and personal objects developing a library. A library is, according to tradition, the private, solemn place where thoughts and culture are built and preserved. These libraries are punctuated with skulls. The link between the skulls and the books is the most distinctive topic of the meditation’s iconography. Hence painting becomes a space or device to think about human existence and its fragility. It becomes a solitary concentration exercise which demands a place for a serious consideration, which is so difficult to find nowadays.
“The series deepens in good part of the painter’s worries and topics throughout his career. This selection is framed between some youth pieces from 1985, and a series of very recent works, which allow us to check the continuity of poetics. Gabarró’s painting is not unseasonable at all, it is presently more up-to-date and appropriate than ever. Austerity, accuracy, control of ego, and the construction of scaffoldings for religious meditation are poetical suggestions which, leaving frivolity and satisfaction apart, are against any hollow vanity, and lead us to personal reflection and moral demand”, according to guest curator, Àlex Mitrani.

Carles Gabarró (Barcelona, 1956) is a painter with a consistent and intense career path. He started his career during the post-modern pictorial euphoria of the 80s, after completing his Fine Arts studies in Barcelona, and after having lived in Paris for a long time. He cannot be considered, however, a Frenchified painter, despite his love towards Georges Braque. He found a clear affinity for the German neoexpressionists like Markus Lüpertz. After Paris he was linked to the prestigious Galerie Maeght. He shared in the enthusiasm for the return to painting thirty years ago, yet he did not listen to the singing of the mermaids from the show and the self-interest which trivialized it. From expressionist principles, he has tried to find meaning in, and answer to, pictorial and existential questions.